Nepal is a nation with a lot of potential for tourism. In Nepal, you’ll find everything from the high Himalayas to the Terai plains, teeming with animals, to the picturesque magnificence of its undulating hills. Even though Nepal has been open to the outside world for seven decades, the country has not been able to draw many tourists or gain much money from its activities.

As far as many people are concerned, Nepal’s biggest draw is its people. As a result of Nepal’s varied ethnic groupings, the nation has a rich cultural legacy and a reputation for welcoming visitors. Nepalese are kind everywhere you go, whether in a remote mountain village, a medieval hill town, or one of the old cities in the Kathmandu Valley. Join in the festivities at one of the numerous Nepalese festivals that occur throughout the year and enjoy the country’s distinct cuisine. Nepal has more festivals than days in the year, making it the only country in the world to provide as many celebrations.

Nepal’s economy relies heavily on tourism. Additionally, it is a significant source of income and foreign exchange. Because it is home to eight of the world’s ten tallest mountains, Nepal is a popular vacation site for mountaineers, rock climbers, and other thrill-seekers. There are many reasons for tourists to visit Nepal, including the country’s rich Hindu, Buddhist, and another cultural legacy, as well as its consistently pleasant climate.

Why Travel to Nepal for Religious Purposes?

Religious sites in Nepal are as follows: 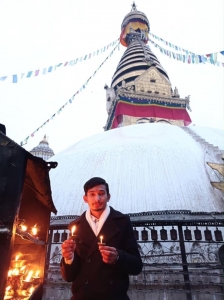 Swayambhunath (Monkey Temple), a historical temple complex, is located in the Kathmandu Valley, to the west of the capital city of Kathmandu. As a prominent tourist attraction, it is one of the holiest Buddhist sites in Nepal, second only to the Boudhanath stupa east of Kathmandu. The Swayambhunath Stupa is a golden spire atop a conical hill of woods. It is the oldest and most mysterious temple in the Kathmandu Valley. From all sides of the valley, its white dome and golden spire may be seen from afar. Several religious artifacts and chaityas make up the stupa’s immediate environs. On a clear day, the temple’s location on a hillside outside Kathmandu offers breathtaking views of the city and the nearby mountains. The stupa, crowned with Buddha’s painted eyes and flanked by prayer wheels and a slew of smaller temples, is at the center of the complex. However, the spectacular moment is provided by a Tibetan Buddhist site. 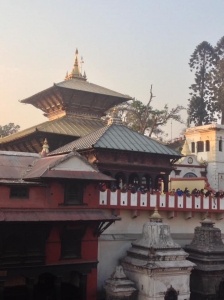 Regarding religious significance, the Pashupatinath temple is one of the most sacred. The Lichhivi King, Prachanda Dev, erected it in the 5th century, and the Malla Kings rebuilt it. This temple may have existed for a very long period based on the finding of a Shiva linga at the turn of the millennium. The Pashupatinath Temple in Nepal’s Kathmandu Valley is now one of seven UNESCO World Heritage Sites.

Pashupatinath is Nepal’s largest temple complex on both sides of the revered Bagmati River. There are 518 temples with monuments in the 0.64-hectare Pashupatinath region. Silver and gold leaf and intricate wood carvings adorn the four sides of the great pagoda temple. Beautiful carvings of gods and griffins adorn the walls and doors of the temple. 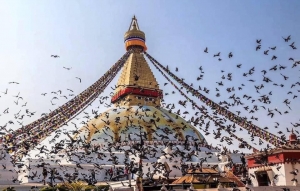 Located at a distance of 8 kilometers away from the center of Kathmandu, the Boudhanath Stupa is considered one of the most wonderful Buddhist pilgrimage sites. The peaceful atmosphere that can be seen all around the stupa is one of the reasons for its popularity. It is a popular tourist site, particularly among Buddhists worldwide.

This holy location is highly sought after by adherents of Buddhism from Tibet, China, Sri Lanka, Korea, and Japan. It is also popular among those practicing Hinduism and other religions. Tens of thousands of pilgrims and tourists visit the stupa that is considered the embodiment of Tibetan Buddhism every year. As Boudhanath is a UNESCO World Heritage Site, it should be preserved as a representation of Buddhist history and culture. As a result, it’s a must-see destination for both domestic and foreign travelers. 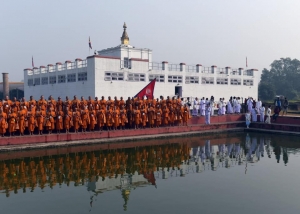 Lord Buddha was born at Lumbini, the birthplace of one of history’s most renowned individuals and the founder of Buddhism. It has become more well-known recently as a tourist attraction for Buddhist pilgrims. This unassuming location, surrounded by marshlands, exudes a majestic atmosphere to those who discover it. As Prince Siddharth, Lord Buddha was pampered here before embarking on enlightenment.

Lumbini’s Sacred Garden, which surrounds the Mayadevi Temple in the center, is where tourists find the most peace and serenity at Lumbini. In a big water feature, the garden’s trees are reflected in the same pond where Prince Siddhartha was purified. Prayer flags dangle from the trees, waving gently in the air while worshipers sit below, focused on their breathing. 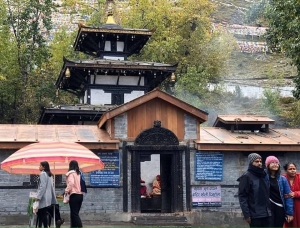 Muktinath, a sacred site for both Hindus and Buddhists, is located at the height of 3,710 meters (12,172 feet) at the base of the Thorong La mountain pass in the Mustang area. Mukti Kshetra, the name given by Hindus to the monument, meaning “place of salvation” in their language, is one of the oldest temples in Nepal dedicated to Vishnu and the Vaishnava faith. There are 108 places of devotion dedicated to Lord Vishnu in the world, and this temple is one of the eight sacred sites known as Svayam Vyakta Kshetras. Srirangam, Srimushnam, Tirupati, Naimisharanya, Srirangam, Totadri, Pushkar, and Badrinath are the other seven destinations. The Shakti Pitha goddess site is one of the 51 Shakti Pitha shrines.

This universe, according to Hindu mythology, is an illusion created by a cycle of reincarnation and rebirth. Aiming for nirvana is a common goal for everyone. This may be accomplished with a trip to Muktinath. On the Muktidhara temple’s grounds, there are 108 water spouts where frozen water comes from two Kunda and bullhead (ponds in front of the temple). A person’s redemption is said to be brought about by bathing in these 108 fountains and two Kunda (ponds). 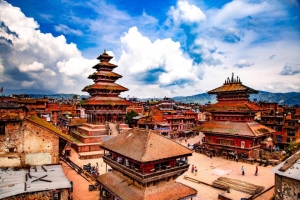 Patan Durbar Square, a UNESCO-designated World Heritage Site, is a must-see historical attraction in the Kathmandu Valley. Patan Durbar Square, like Kathmandu’s, lay in the heart of the city and was formerly home to the Patan rulers. At the height of the Malla kings’ rule, the courtyard is a dazzling display of Newari architecture, with regal mansions, magnificent courtyards, and graceful pagoda temples. The reconstructed Keshav Narayan Chowk has been transformed into a bronze artifact museum in one of its many courtyards. Tusha Hiti’s underground bath, the Sundari Chowk’s woodcarvings, stone sculptures, and metal sculptures are all on show there.

Patan is encircled by four stupas, one at each of the city’s four corners. Emperor Ashoka, legend has it, erected these stupas. Patan takes great pride in this architectural gem, one of the city’s most prized possessions. “Patan signifies eternity itself, and Patan Durbar Square is truly the breathtaking sight of Asia,” a Western lady writer explains. Many tourists view Hindu and Buddhist temples and monuments, including bronze gates, guardian deities, and intricate sculptures. The most popular tourist destination in town is Patan Durbar Square. Old temples, shrines, and ancient locations are all located in the plaza, known for its beautiful carvings. 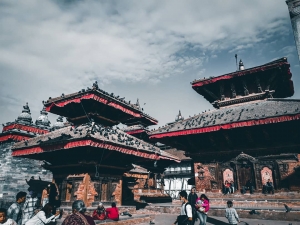 Kathmandu Durbar Square, also known as “Basantapur Durbar Square” or “Hanuman Dhoka Durbar Square,” is a famous tourist destination in Kathmandu because of its proximity to Thamel, the city’s most popular tourist district. Since 1979, UNESCO has designated the property as a World Heritage Site. It’s a wonderful site because of its historical significance, stunning Newari architecture, and bustling bazaars.

It is flanked by Buddhist and Hindu temples in the old city of Kathmandu. Pagoda-style structures with elaborate carvings on the exteriors are common. In this area, most structures date from the 15th through 18th centuries. This square, with its antique temples and palaces, represents the religious and cultural traditions of the people. Other notable attractions are “Kumari (The Living Goddess) Gar” and the “Kayastha Mandap” Maru Ganesh, Shiva Parvati Temple, Bhagwati Temple, the old palace, Saraswoti temple, and the Krishna Octangular Temple.

These rites and rituals of great significance are held at Kathmandu Durbar Square to this day. After the April 2015 earthquake, Kathmandu’s Durbar Square was severely damaged. But the UNESCO World Heritage Site remains awe-inspiring and awe-intrinsic

Gosaikunda, a frozen lake in the Langtang National Park, is located in the Rasuwa district. The Dorje Lakpa range divides the park in half east-west, with the park’s sacred lake perched at 4,300 meters above sea level (6,988 meters). The lake, located at an altitude of 4,380 meters, is an alpine freshwater oligotrophic lake with a surface area of 34 acres. Other nearby lakes include Saraswatikunda, Surajkunda, and Bhairabkunda, as well as Gosaikunda itself.

One of Nepal’s most revered holy places is located in the Gosaikunda region. Gosaikunda is said to be the residence of Lord Shiva and Goddess Gauri in Hindu mythology. Gosaikunda’s origins are mentioned in the Ramayan and Mahabharat epics, the Bhagwat Puran, and the Vishnu Puran, among other Hindu texts. During the festival of Janai Purnima, the lake’s water is said to be sacred and of particular significance. Thousands of pilgrims from Nepal and India visit the temple during Janai Purnima. To soothe his burning throat after swallowing poison, Lord Shiva allegedly pushed his Trishul (holy Trident) into the mountain and pulled out the water.

Nepal is a long and narrow country, with mountains in the north that are covered in snow throughout the year, plains in the south that experience hot summers and windy winters, and hilly valleys in the center that have a temperate climate that makes it possible to travel there throughout the entire year. Throughout the course of the year, the people here observe a variety of festivals, each of which has a distinct religious significance. As a result, the optimal time to visit Nepal may differ for different destinations within the country, so plan your trip accordingly.